Last week I teased you with my upcoming post! So for those of you who have been drooling --here it is.

TITLE: The Adventures of Beekle The Unimaginary Friend 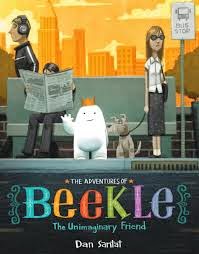 Opening lines: “He was born on an island far away where imaginary friends were created. Here, they lived and played, each eagerly waiting to be imagined by a real child.”

Synopsis: The opening lines say it all. A creature who looks like a cross between a cotton ball and a marshmallow with legs wants to find the child who imagines him, the child who will be his perfect match. But when the child doesn’t appear, he sets out to find him/her.

What I liked about this story: Confession. Rudolf the Red-nosed Reindeer is my FAVORITE holiday show on television. I sing along with Clarice and my eyes well up at the Island of misfit toys every time. Even though I know what's coming, I fall under the spell. This story about first friendships has that same spell-spinning magic. When I read Beekle, I immediately thought of the characters on the Island of misfit toys waiting for someone to want them. So yeah, I got a little teary-eyed. Beekle is a simple story. One that won’t wow you with flashy language. But the simplicity is part of its charm. It’s a simple message—everybody needs somebody and we’re better for our friendships—and it’s well told. The text oozes sweetness and happiness.
The art is equally charming. We see Beekle's crown in the first spread but it isn't until three-quarters of the way through the story that we see the back of the crown up close and Santat reveals that it is a paper crown seamed in the back, taped together. Just what a child would imagine! The bright colors of Beekle's birthplace give way to muted colors in "the real world" but once he encounters children, the vibrant colors re-emerge. If Santat hasn't started making Beekle cuddly toys he should because this is the kind of character a reader wants to HUG!

Activities/Resources:  Watch the trailer. See if you agree that the author has a tribute to Max and Where the Wild Things Are in the story. Minh Le has a great interview with the the author on his Book Riot blog.
Talk about how someone goes about making a friend.
Pick a new name for yourself, or someone else.
Make cupcakes (the ones in the book look like chocolate cake with vanilla icing!) to share with someone who might be a new friend. :) If you want to eat them all yourself - maybe it's an imaginary friend!
Draw a picture of an imaginary friend.


This review is part of PPBF (perfect picture book Friday) where bloggers share great picture books at Susanna Leonard Hill's site. Along with tons of writing wisdom, she keeps an ever-growing list of Perfect Picture Books. #PPBF
Posted by Wendy at 5:16 AM