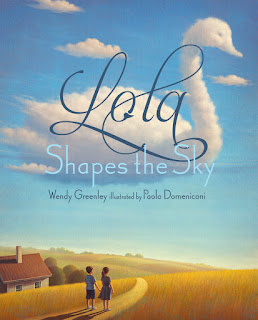 Clouds in the sky work to make weather through shade, rain, and snow, but one special cloud named Lola turns herself into incredible, creative, artful figures.
Thor, a large, godlike, domineering male cloud, chastises Lola for her playfulness, telling her “Clouds make weather, not shapes,” and howling “You’re the worst cloud ever!” Lola refuses to be intimidated or dissuaded by the overbearing voice of Thor and continues to display her personality through her fabulous shapes. “I may not be a weather-maker!” she declares, “but I can be ferocious…humorous…gorgeous.” For people on the ground Lola’s creations are remarkably lifelike, resembling in turn a roaring lion, a juggling penguin, and a beautiful girl. Despite Thor’s disapproval, the other clouds are inspired and learn to fluff and puff themselves into shapes with Lola, while Thor eventually relents: “Bravo, Lola!…You are one of a kind.” Lush digital illustrations place pastoral scenes in the foreground with (mostly) sky-blue hues in the background, accentuated by the downy, frothy whites of the various cloud characters. Lola’s attitude inspires confidence in one’s imaginative abilities to pursue life’s aspirations. Though not a new idea, this rendition is lovely and will couple well with Charles Shaw’s classic, It Looked Like Spilt Milk (1947). A brief addendum on the different types of clouds and their significance is included.
An airy idyll. (Picture book. ages 4-8)
Pub Date: March 12th, 2019
ISBN: 978-1-56846-319-3
Page count: 32pp
Publisher: Creative Editions/Creative Company
Review Posted Online: Jan. 28th, 2019
Kirkus Reviews Issue: Feb. 15th, 2019

Find Wendy's story: "The Reign of Cleopatra" in:


Chicken Soup for the Soul: I Can't Believe My Cat Did That!: 101 Stories about the Crazy Antics of Our Feline Friends 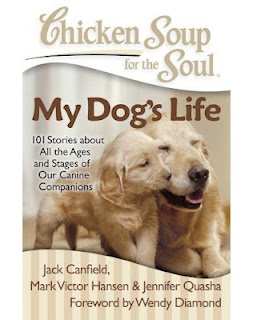 Chicken Soup for the Soul: My Dog's Life: 101 Stories about All the Ages and Stages of Our Canine Companions


Chicken Soup for the Soul Celebrating Brothers and Sisters: Funnies and Favorites About Growing Up and Being Grown Up 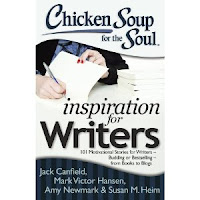 Wendy's story "Getting Started" in:

Chicken Soup for the Soul: inspiration for Writers

Wendy's story "Zen Dog" is on bags of Chicken Soup for the Pet Lover dog kibble. It can be hard to find (the story, not the dog kibble).