With Mother's Day coming up this weekend, I thought about profiling a title featuring Moms. But this book has been waiting in the queue and it is, IMHO, truly one of the perfect picture books. We need to get this one on the list!

And to keep you salivating. My copy of Beekle arrived this week, and yes it is everything folks have been saying about it. Stop by again next week if you want to learn more! 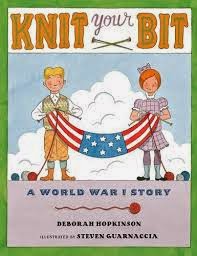 Themes: World War I, knitting, gender roles
Opening: When Pop left to be a soldier, I wanted to go with him.
"I'm brave," I told Pop. 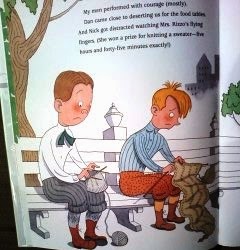 Synopsis: Mikey wants to do something BIG to support his dad fighting in World War I. But when his teacher suggests that the class participates in a "knitting bee" in Central Park, the boys think knitting is for girls and only agree to take part when the girls make it into a competition.

What I like about this book: I recently read a stack of letters my father wrote during World War II and I was struck by his request for socks from home. I didn't realize how our troops relied (and still rely!) on the generosity of their families and friends for many "basic" items. It isn't overstating it to say that little items can make a difference to someone, and without being pedantic this book gets that message across.
Some of the facts in the story are true. In her end matter Ms. Hopkinson tells us that there was indeed a woman at the knit-in who knit an entire sweater in six hours! The endpapers for the book show five historical photos, one of sheep grazing on the white house lawn and four of knitting groups.

Activities and Resources: Learn to knit. Some yarn stores offer free classes--it's in their interest to keep people buying their products. I used to be good at it and made myself a sweater or two, but haven't pulled out the needles in some time. When I was growing up and my family had sheep, yarn was easy to come by! Besides, how many afghans does one family need?
If you are near New Orleans, visit Knit Your Bit at the National World War II museum. In addition to historical information, the museum provides suggested patterns for scarf knitters who want to contribute to veterans. The museum collects the scarves. The author also provides the link to Knitting for Charity in her end matter for knitters who want non-veteran projects.
If you don't want to knit, find a charity of your choice online and donate an item on their wish list. Animal shelters often need old towels, family shelters may need toiletries.
If you want to compare my review with Publisher's Weekly (I don't read theirs until after I write mine!) you can read it here.

This review is part of PPBF (perfect picture book Friday) where bloggers share great picture books at Susanna Leonard Hill's site. Along with tons of writing wisdom, she keeps an ever-growing list of Perfect Picture Books. #PPBF
Posted by Wendy at 7:04 AM