When a Picture IS Better than a Thousand Words: My Gift 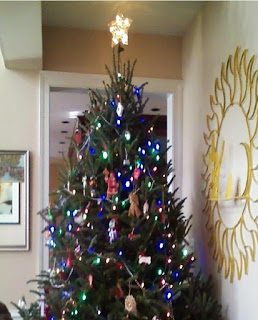 The best part of the holidays is relaxing with family and friends. Hands down, no contest. But for most people, gift-giving and receiving is also a part of it and my family is no exception. This year, my husband gave me a gift that brought me to tears, so I thought I’d share the story of my gift.

Over the years, our family has had three four-legged family members. Now just so you know, I’m not the kind of person who dresses her dogs up or thinks they’re human. I know they’re dogs. But I also know that from the moment they came through the door, they were part of the family. They were living, breathing family members, not furniture or play toys.
Warning! The next part of the story is sad, but then it gets happy again.

Our “last” dog died shortly before Christmas. Frisbee was a black lab Rottweiler mix who became part of our family when I volunteered for Twyla's Friends, a dog rescue group in Texas. We fostered a litter of puppies and Frisbee had not yet been adopted when we took on another canine family member, a severely epileptic cattle dog Weimeraner mix named Angel. We decided to keep Frisbee, too.
Angel and Frisbee’s full story is in Chicken Soup for the Dog Lover's Soul: Stories of Canine Companionship, Comedy and Courage, which is being re-issued by the Chicken Soup for the Soul franchise sometime in 2013. But here’s the short version:

Angel had multiple seizures every day. And not the relatively calm petit mal staring off into space kind of seizures. If no one was there to hold her she had the ‘bash her head on the floor, run full speed into walls during seizure blindness, jump through the kitchen window’ kind. She was on phenobarbitol, potassium bromide, and Keppra. We found a series of incredibly valuable websites that talked about how to help seizure dogs. But the one thing that was guaranteed to help Angel was if someone put an arm under her head and spoke calmly to her as the seizure came on. Instead of being upset by our presence, she came out of it quicker and without damage. The only problem was—not knowing when a seizure was coming, someone would have to be with her 24/7. Tough to do. Even the most devoted pet lovers have to go to work and school and grocery stores and...you get the picture. It was tough.
One day I was at the other end of the house and heard Frisbee making a strange noise. I ran to find her lying partly across Angel, holding her down. Somehow, she knew that Angel was starting to have a seizure and since I wasn’t in the room, Frisbee stepped in. From then on, she held Angel for us until someone got there. The vet initially said Angel wouldn’t live more than two years, but she died last year at the age of fourteen years, one month.
Frisbee died at home, in my arms, shortly before Christmas this year. Painfully, achingly tough.

Even though dogs’ muzzles get white, and in our heads we know they are aging, dogs have an uncanny ability to stay young at heart and to live each day to the fullest. Maybe it’s because of this that their death is such a shock.

Without my knowing, my husband took a stack of family photos with our dogs in them and sent them to the incredibly talented Wendy Trommer in New Hampshire (another Wendy!). He had met Wendy while they were both volunteering for the FIRST robotics program that one of our sons was a team member of, and knew she was also is an artist. 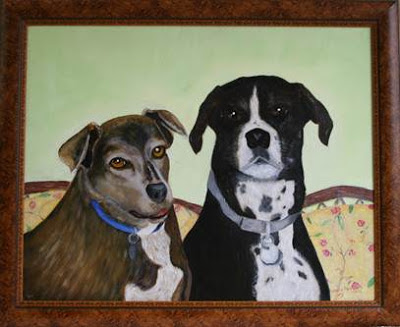 All I can say is WOW!
Wendy Trommer never saw our dogs. But from a series of pencil sketches that she had my husband approve, she created an amazing oil painting. She brought Angel and Frisbee to life on canvas for us. For me.
If the house was on fire, it’s get the family out—then the painting. It means more than any other “thing” in the house. If you get a chance, I’m sure Wendy would love for you to stop by her website and tell her how great the painting is!
Hope you all received what you were hoping for—or in my case what you needed but didn’t know you did.
Posted by Wendy at 5:56 AM