The Mark of the Dragonfly - Book Review

First, my thanks to Delacorte Press (Random House) and Shelf Awareness for the Advance Reader's Copy of THE MARK OF THE DRAGONFLY by Jaleigh Johnson. This is an unbiased review.
Note that the official publication date for this book is scheduled for March 25, 2014 and some details in the copy I read may have changed. 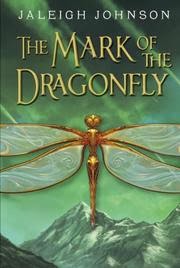 
Opening:   "Micah brought the music box to her on the night of the meteor shower. Piper never slept on these nights, when debris from other worlds fell from the sky."


My overall takeaway impression of this book?
There are so many questions left unresolved, it feels like the start of a series. And if it is, I wish the author and publisher said so up front. It would set different expectations for the book. Judging it as a stand-alone, it has fascinating parts and is a quick read. But why introduce cities and worlds that are never used in the story? What significance is the dragonfly? If the king lived in Squid City could it just have easily been the mark of the squid? We'll never know. Unless this isn't the whole story.

The opening of the book had a distinctly dystopian tone. Set on the world of Solace, where there is a class structure of haves and have-nots, the main character, Piper, is a thirteen-year-old girl who lives in a city of have-nots. The citizens scavenge among the debris the plunges to the ground from other planets to find goods of value. Piper has been recently orphaned and has to rely on her own wits. Luckily, the town appears quite orderly despite the poverty and no one is preying on Piper. Reminiscent of the main character in Marissa Meyer's Lunar Chronicle series, Piper is a machinist of unparalled talent.

About a quarter of the way through the book, the tone changes to a steampunky adventure. Piper boards the local steam train ( the 401) hoping that she can return a girl (Anna) she found in the debris field to the King in exchange for a reward, because Anna bears the King's mark- a tattoo of the dragonfly. From this point on, the story moves faster, but I kept wondering what happened to the best friend, Micah, Piper left behind? And the characters felt so naive and young that the small bit of romance that is hinted at between Piper and Gee, the boy/dragon creature known as a chamelin, was off-putting. Like if Harry Potter had suffered pangs of love and lust for Hermione in Book One.

I'm also not keen on the back cover blurb. "One is smart. One is brave. And one is hiding a secret that could cost them their lives." If this refers to the three main characters, that means two of them aren't smart. Two of them aren't brave. And after reading it is clear that Anna isn't hiding her secret. She just doesn't remember her past or understand what has happened to her.

I should note that Kirkus gave the book a glowing review. I would have to say-neither thumbs up or thumbs down. A 3 out of 5. It's a well-written book with an interesting premise that makes a lot of unfulfilled promises.  Maybe all the snow and cold has put me in a bad mood because I did enjoy reading this. The world-building is well done and the characters are interesting. If there is a book two and three that flesh out and give closure to the parts that were left in question--I'm on board!

Email ThisBlogThis!Share to TwitterShare to FacebookShare to Pinterest
Labels: Jaleigh Johnson, middle grade, review, The Mark of the Dragonfly