The Evolution of Calpurnia Tate


While Perfect Picture Book Friday is on summer hiatus, I thought I might write some reviews of books in other book formats. I know, y’all thought I only read picture books! Well, I do read a LOT of them. But there are other books that find their way into my library tote.
One book that was on my list to read until recently is The Evolution of Calpurnia Tate by Jacqueline Kelly. With my background in the sciences, I’m surprised it took me so long to get to it.
This was a 2010 Newbery Honor book and I came to it with high expectations. 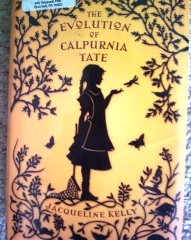 Most of my expectations for this middle grade novel were met. The author uses beautiful language to evoke the surroundings of a rich family’s post-civil war lifestyle. The only drawback to this is that in first person narration the eloquent phrases often gave the eleven-year-old main character/narrator a “voice” older than her grandfather's. Certainly, times have changed, but I wondered if today’s children would find the voice as distancing as I did. In contrast, when thinking about her older brother’s burgeoning interest in the opposite sex, Callie’s emotional response felt very young and I had difficulty reconciling the disparate tone.

Similarly, I admired Callie's spunk but found the home life versus science attitude somewhat off-putting. As an adult, looking back at life in 1899 (Callie's era) I understood the author's viewpoint but as someone who left a professional career to take care of my own children I didn't like the message I got that there are women of worth and women who stay home. Even at the end, Callie feels uni-dimensional in this regard. I recognize that different women are entitled to different choices. I think what stopped me is that Callie not only doesn’t want any part in what had historically been a woman's traditional role in the world, she doesn’t recognize any value in other women’s part in it. I couldn’t put my finger on the quote when I went back but either Callie or Grandfather opines that the women are at home because they don’t know any better. Yikes. These attitudes seemed stranger after I read the author bio and learned that the author, Jacqueline Kelly, had-- like myself--been in a field of science and then become a lawyer before turning to writing. Perhaps the book was written this way precisely to promote discussion.

The book does a marvelous job weaving scientific discoveries of the day in with the family’s life. Grandfather’s fascination with the automobile made me chuckle. Readers who are looking for plot though won’t find it here. I have to admit I found myself skimming and had to make myself go back over parts. It felt like assigned summer reading rather than something I would pick if I were a child again.
While it won’t make my list of favorites, this book is certainly worth a read.
Anyone else want to weigh in on it?
Posted by Wendy at 6:09 AM

Email ThisBlogThis!Share to TwitterShare to FacebookShare to Pinterest
Labels: middle grade, review, The Evolution of Calpurnia Tate, writing for children